If we take memetics seriously then the 'me' that could do the choosing is itself a memetic construct: a fluid and ever-changing group of memes installed in a complicated meme machine. 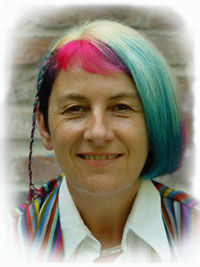 Susan Blackmore has been an energetic contributor to research on Memetics notably with her book: The Meme Machine.

Susan Blackmore became interested in memetics as a research subject in about 1995 when she started work on The Meme Machine. This book has become a classic and is available in twelve languages.

The Meme Machine has been endorsed by Richard Dawkins as a worthy successor to his original concept of memetics:

But I was always open to the possibility that the meme might one day be developed into a proper hypothesis of the human mind, and I did not know how ambitious such a thesis might turn out to be. Any theory deserves to be given its best shot, and that is what Susan Blackmore has given the theory of the meme.

Waking from the Meme Dream

One of my favorite of Sue's articles is Waking From the Meme Dream. As she enlarges upon in The Meme Machine, memetics predicts that the memes occupying our minds are those that have evolved to occupy our minds, there is no higher reason for them and they may not always be in 'our' best interest. A meme that is particularly successful at occupying our minds is the selfplex or our sense of self. It largely controls those thoughts we think and usually allows only like minded thoughts into our consciousness.

Sue suggests a couple of methods for loosing the hold of the self. One is science, as science demands that thoughts we see as true are backed by evidence and the other is Zen meditation where the self is dissolved away giving other memes a chance to surface.

Imitation and the Definition of a Meme

Amongst researches in the cultural aspects of Universal Darwinism, Sue is perhaps typified by her insistence, true to Dawkin's original vision, that Memes are most importantly Darwinian replicators. Her article, Imitation and the Definition of a Meme details this approach. From her conclusion of this article:

My argument has been that the definition of the meme depends on, and should depend on, the concept of imitation. Therefore, only those things that can be passed on by imitation should count as memes.

This means we can immediately exclude many things that a few authors have confusingly included as memes, such as perceptions, emotional states, cognitive maps, experiences in general, or "anything that can be the subject of an instant of experience". Furthermore we can build on the long history of research in animal behaviour to distinguish imitation from contagion, and from individual and social learning, and so to eliminate from memetics the catching of yawns or all the many things we each learn for ourselves, by ourselves.

This, I suggest, leaves us with a simple definition of the meme that not only makes it easy to decide what is and is not a meme, but also shows why it is that humans alone have produced complex culture. Humans are fundamentally unique not because they are especially clever, not just because they have big brains or language, but because they are capable of extensive and generalised imitation. I think we will discover that it is imitation that gave rise to our cleverness, big brains and language - and it is imitation that makes culture possible, for only imitation gives rise to a new replicator that can propagate from brain to brain, or from brain to artefact and back to brain. For all these reasons I suggest that we stick with the dictionary, and define the meme as that which is passed on by imitation.